Julia “Jules” Murray was born in South Africa in 2001 and moved with her family to Hong Kong when she was 3 years old. During the 9 years living in Hong Kong, they returned annually to South Africa and always took time to enjoy the wildlife. In 2012, on her 11th birthday, she decided to trade in a traditional party for a fundraising mission to save the rhino. She invited her friends over to paint pictures of rhino and auctioned them off to friends and family, raising over R30 000!

When he heard about Jules’ party, the late Dr Ian Player, rhino advocate and “one of the world’s strongest wildlife warriors” in Jules’ words, sent her a video message admiring her courageous efforts and thanking her for setting an example for the world to follow.

After some research, Jules decided to donate the money to Chipembere Rhino Foundation, a rhino conservation effort in which Dr William Fowlds and his team are involved. She had heard about all the amazing work Dr Fowlds was doing for the rhino and knew the money would be put to good use.

Chipembere used the money to buy 3 radio tracking collars for rhino in the Eastern Cape reserves. In 2012, while visiting her brother at boarding school, Dr Fowlds invited Jules into his helicopter to help collar the rhino that she had raised funds for. She was humbled by this experience, being able to be up close to and touch the “gentle giants” that she loves so much. Meeting Dr Fowlds and his team was so inspiring, that she knew she had to carry on doing what she could to raise money and awareness to help save these beautiful creatures.

It was then that the JuMu Rhino Fund was born, and Jules was determined to raise more money and become more involved in the fight to save the rhinos.

Jules is very interested in supporting the communities around the rhino too. She realises that they need to be empowered and be able to create sustainable lives for themselves so as not to be tempted to accept money for poaching.

In line with this theme, Jules and her mother, Bloss, scoured the area where they were staying for rhino trinkets to take back to Hong Kong. Her first find was a bead artist working from Ballito beach, who was willing to make as many beaded rhino as possible for her – he managed to make 50 in one week, so she bought them all to sell to her friends and family in Hong Kong.

These, along with other rhino trinkets bought from various African children’s charities, were sold by Jules and her friends at school markets and fairs to raise another R30 000 for Chipembere. This was the beginning of her journey to educate everyone around her about the endangered rhino. Jules began to give talks at local schools, educating the kids about the rhino and how they can help to save them. She even gave the kids at the talks a copy of Bongi’s Quest, a South African storybook about rhino poaching that had been translated into Mandarin. 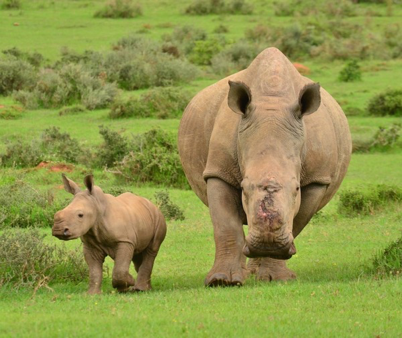 Jules is inspired by stories of the rhinos she has been involved with. With the money donated to Chipembere, they were able to collar Thandi the rhino at Kariega Private Game Reserve. Thandi was saved by Dr Fowlds after her horn was brutally hacked off by poachers. Jules was able to be on site for one of Thandi’s procedures. She had seen the photos of Thandi’s hacked off horn, but seeing up close the pain and torture Thandi had experienced, had even more of an impact on Jules than she had imagined. Just heartbreaking!

Thandi has become a fantastic success story for the rhino. In January 2016 she gave birth to a beautiful calf – a little miracle baby, Thembi, whose name means Hope. Thandi gave birth to her second calf in January 2017, named Colin. Thanks to Dr Fowlds and his team, not only did Thandi survive the most horrific poaching ordeal, but she now has two healthy calves, a symbol of the fight that we need to win against the poachers.

When Jules was 12, she decided to have another rhino painting party. Over 90 people came to her house in Hong Kong and painted small ceramic rhino, raising another R30 000.

Through selling rhino trinkets and bands, giving talks at schools, being a guest speaker at the World Youth Rhino Summit for 2 years running, and by accepting donations from friends and those inspired by her story, the JuMu Rhino Fund has raised over R500 000 for the plight of the rhino.

Much of this money has been donated to Chipembere for the good work they are doing in this fight. They have used the money in various ways, including collars for rhino in the Eastern Cape Parks, vet and helicopter costs, as well as other rhino protection initiatives in the Eastern Cape. They were also able to buy clothing and equipment needed by rangers who guard the rhinos that were moved from South Africa to Botswana. These rangers now have proper uniforms, good boots, Garmin tracking devices, camelbacks for water and binoculars. These rhinos will be protected 24/7. Some money has also been given to Dr John Marais from Saving the Survivors, to buy much needed equipment to treat the rhino in the field.

Over the past 8 years, Jules has been featured in various newspapers, magazines and even on radio, both in Hong Kong and in South Africa. In January 2014, after moving back to South Africa to attend boarding school in Grahamstown, she started making JuMu rhino wristbands in various colours. and concentrated her efforts on selling them in schools all over South Africa. These have been sold by various schools in South Africa in their school colours, so kids are able to wear them proudly and advocate for the rhino wherever they go. The JuMu wristbands have even made it into schools in America, Australia and Brazil. 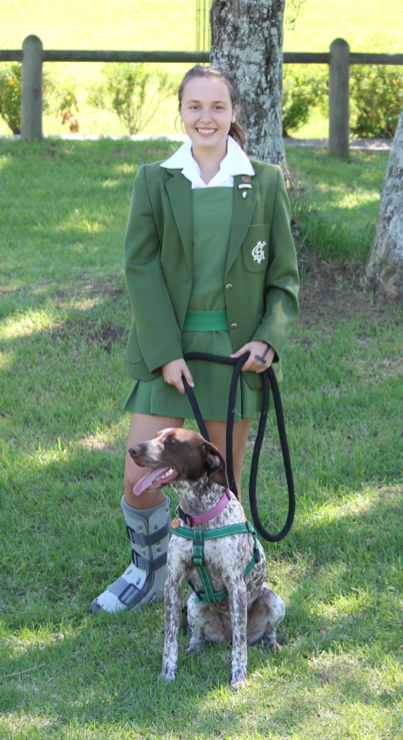 With on of the donations, Chipembere have invested in Dixie the Dog, who Jules is very excited about. Dixie is being trained as a human scent tracker dog. She is still doing her general bush familiarisation training, but once trained, she will be a first-class poacher tracker and help ensure that the rhino are safe.

JuMu’s latest fundraising initiatives try to bring some fun to our Rhino saving efforts and so, designed were the JuMu drink koozies to keep both you and your drink cool! These are now available to purchase through our social medias and email!

Jules firmly believes that we, as human beings, need to do everything we can to protect the world’s endangered animals and stand up for them to ensure that generations to come can enjoy and appreciate them like we do. Young people all over the world need to actively participate in determining the future of the world’s shrinking wilderness areas. We must be the responsible generation, the protectors and preservers of the planet’s threatened fauna and flora. She would like to educate and share her passion with as many people as possible. If you would like to hire her to speak at your event, school or charity, please complete the form on our contact page.

As you all know, there are many many animals that are endangered in the world, & I feel that we, as the young generation, must do everything we can to protect them, and to stand up for them where we see they are not being protected. No matter where we live, we all have a really, really important part to play in determining the future of the world’s shrinking wilderness areas. We are all responsible for protecting and preserving the world’s threatened fauna and flora. Let’s educate our friends and our parents, so that there are beautiful creatures and wilderness areas left for our own children to see one day! ~ Jules